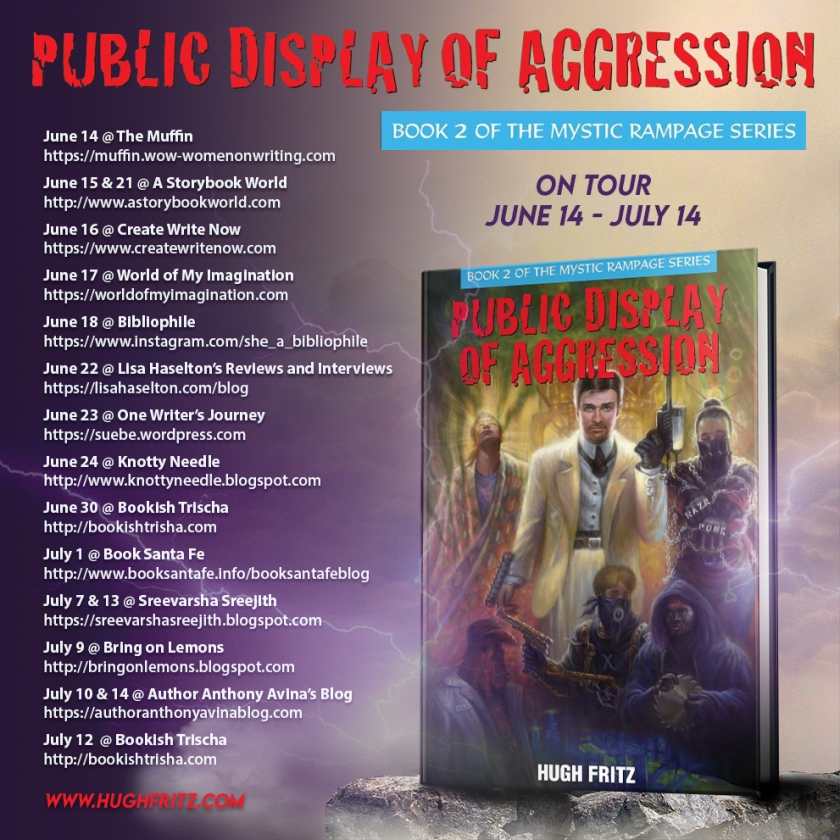 From the beginning of the Mystic Rampage project, I knew I wanted it to be at least a two-part series. It seemed like the best way to combine the fantasy and science fiction elements. In the first novel the Genie’s powers have some principles in biochemistry or physics, but they are mostly considered magic. In the second book I introduced a deeper scientific explanation for their abilities. I was unsure about writing a third installment. I killed off a few characters at the end of book 2 and wasn’t sure I had enough material for another full-length novel. I’ve been working on it almost a year now and I’m still not sure I have enough.

Part of the reason I decided to attempt a third novel was due to Soleil’s uncertain fate at the end of Public Display of Aggression, although it’s probably unnecessary. There’s nothing wrong with leaving readers with a mystery; it’s why fan theorists exist. The main reason I’m working on another is that three books just feels natural. I’m aware that duologies exist but I can’t recall any off the top of my head. For some reason when authors decide to make a series they are expected to write at least three. I don’t know when it became the norm, but now that I’m conforming to it I find three novels gets boring. It’s too long for me to follow the same characters. Flarence was always my favorite character in this series to write, but even he’s become dull. I’m getting sick of finding reasons for him to get into fights. I’m also running out of clever ways for the Genies to use their magic. I have a lot of respect for authors who produce series that consist of five books, or ten, or even more. I have even greater respect for people involved in comic books. Some superheroes have been around for more than 70 years, and they still fly off shelves. I can’t imagine keeping a story going that long. Mystic Rampage is going to be my last series, at least for a while. From now on, it’s one-and-done for me.

Soleil and Flarence are immortal Genies who can bend the fundamental forces of the universe through willpower alone. For centuries, they have considered themselves the most formidable beings in the world, but some newcomers just might give them a run for their money.

Magic has always been limited to living things. Throughout his life, Soleil has never come across an object with supernatural capabilities. Now, a human has somehow constructed guns with the ability to fire spells. Genies are normally resistant to offensive magic, but Soleil knows from experience that the enchanted revolvers harm all creatures equally.

Resurrection is one of the few limitations to a Genie’s abilities. Not even magic should be able to bring a person back from death. Recently, though, Flarence saw a corpse not only rise but also fight. Endowed with incredible speed and strength, the revived man seeks revenge on his murderers.

To make matters worse, Darren (the third member of the Genie “family”) is still missing. He’s been lying low, biding his time, but hasn’t forgotten about Officer Tymbir, and has every intention of settling their score.

Darren, the revived corpse, and the man with the magic guns have a list of people to kill, and are eager to spill blood. With the help of Mohinaux and Claire, Soleil and Flarence rush to locate them, uncover the sources of their powers, and find a way to stop them.

This book is perfect for adults who want to get in touch with their inner child!

Purchase Public Display of Aggression on Amazon, Organic Books, Page One Books and Barnes and Noble. Be sure to also add this to your GoodReads reading list.

About the Author Hugh Fritz:

Hugh Fritz is a fan of monsters, mad scientists, sorcerers, and anything that involves beings with incredible powers beating each other senseless. After years of writing research papers, he decided it was time to give reality a rest and let his imagination run wild.

Find out more at:

Join us as we celebrate the launch of this incredible tale. Find out more about the author, Hugh Fritz, and enter to win a copy of Public Display of Aggression for yourself.

Deirdra Eden shares the spotlight today – and in today’s spotlight it is none other than Hugh Fritz with Book #2 in the Mystic Rampage Series: Public Display of Aggression! Readers won’t want to miss an opportunity to dig into the magic of this incredible story!

There’s a guest author at Mari McCarthy’s Create Write Now and it’s the one and only Hugh Fritz who recently finished Book #2 in the Mystic Rampage Series. He’s busy promoting Public Display of Aggression but has taken time out of his busy schedule to write an informative post about “Using Bacteria and Fungus in Food”. Join readers at Create Write Now to learn more!

June 17th @ World of My Imagination with Nicole Pyles

Nicole Pyles shares her thoughts as she reviews Public Display of Aggression by Hugh Fritz. Readers at World of My Imagination will put their imagination into overdrive with this fast-paced story involving plenty of magic. This is Book #2 in the Mystic Rampage Series but reads just as well as a stand-alone. Don’t miss today’s review by Nicole!

Diti Shah shares her book review with her Insta followers – find out what she thinks of Public Display of Aggression by Hugh Fritz! This is Book #2 of the Mystic Rampage Series that has delighted readers and left them wanting more!

There’s a guest author at A Storybook World and it’s the one and only Hugh Fritz who recently finished Book #2 in the Mystic Rampage Series. He’s busy promoting Public Display of Aggression but has taken time out of his busy schedule to write an informative post about “Illustrations in Fantasy Novels”. This will be great for writers and readers alike.

Lisa Haselton interviews Hugh Fritz about the Mystic Rampage Series and Book #2 Public Display of Aggression. Don’t miss this insider opportunity to hear from the author himself – the man behind all the imagination and fun!

Judy Hudgins keeps readers on the edge of their seat at the knotty needle blog as she reviews Book #2 in the Mystic Rampage Series . Readers will want to grab their own copy of Hugh Fritz’s Public Display of Aggression so they won’t miss a beat of this imaginative story!

The spotlight is bright at Bookish Trischa and today it shines on Hugh Fritz and his latest creation Public Display of Aggression – Book #2 in the Mystic Rampage Series! Don’t miss this opportunity to learn more about the book everyone is talking about!

Crystal Otto reads a lot and she loves a fast-paced imaginative story. Public Display of Aggression is 5 Stars and she can’t wait to tell readers more about it at Book Santa Fe today! This is the 2nd book in the Mystic Rampage series, but she says it reads great as a standalone. Read Crystal’s full review today!

Readers of Varsha’s blog will hear from Hugh Fritz today in a post about “Fan Fiction” as he takes a break from promoting his latest book Public Display of Aggression. Don’t miss this guest post and opportunity to learn more about the Mystic Rampage Series and the man behind all the excitement!

Carmen is an avid reader and soon to be high schooler – she loved Book #1 in the Mystic Rampage series and she joins us today to share her 5 Star Review of Book #2 – Public Display of Aggression by Hugh Fritz. Don’t miss her youthful insight!

Readers of Author Anthony Avina’s Blog will hear from Hugh Fritz today as he pens a guest post titled “Preference of Series of Stand Alone Pieces”. This post will delight authors and readers alike – so don’t miss it! This is also a great opportunity to learn more about the Mystic Rampage Series and Book #2, Public Display of Aggression.

Today is the day – Trischa reviews Public Display of Aggression – Book #2 in the Mystic Rampage Series! Don’t miss this opportunity to learn more about and hear from Trischa herself as she shares her insight into the writings of Hugh Fritz.

Today it’s Varsha’s opportunity to share her review of Public Display of Aggression. Don’t miss this chance to learn more about the fast-paced writing of Hugh Fritz and Book #2 in the Mystic Rampage series!

A few days ago, readers of Author Anthony Avina’s Blog heard from Hugh Fritz in a guest post: “Preference of Series of Stand Alone Pieces”. Now it’s review time – hear what Anthony has to say in his review of Public Display of Aggression, Book #2 in the Mystic Rampage Series by Hugh Fritz!

One thought on “Guest Blog Post: Preferences of Single vs Series Works”