One man’s journey to escape a dangerous religious group he was born and raised in and the harrowing experience of trying to save his own children in the process comes to life in former FLDS member Wallace Jeff’s novel, Destroying Their God. The book, (written also by Shauna Packer and Sherry Taylor), shows the terrifying process of being indoctrinated into a harmful doomsday religion and how despite a lifetime of indoctrination he managed to escape the group, but not without both physical and emotional scars. Here’s the official synopsis:

In 1991, Wallace Jeffs was coerced to become an FLDS polygamist.

In 2011, Wallace rebelled against the sect, and the FBI helped him reclaim his kidnapped children.

Then an “accident” put Wallace into a forty-five-day coma.

Growing up as half-brother to future Fundamentalist Latter-Day Saint prophet Warren Jeffs, Wallace tried to follow FLDS teachings. After he built a successful business, the church required him to marry a second wife. Wallace fathered twenty children, but he never felt comfortable with polygamy or many other FLDS beliefs.

As his prophet-brother increasingly manipulated him, Wallace started hearing about FLDS atrocities. On the day the FBI arrested Warren Jeffs for child rape, the prophet was en route to reclaim Wallace’s second wife for himself. Wallace defied the prophet and soon ended up in a coma. Though Wallace feared FLDS sabotage caused his car crash, he kept fighting the sect.

With today’s movement against male abusers, Wallace’s story reminds us that power and position don’t corrupt all men. In 2018, Wallace found resolution by marrying an LDS woman in the Salt Lake Temple. At the same time, he renews our concern for the thousands who still live under FLDS control, including some of Wallace’s own children.

This is one of the most tragic, heartbreaking yet important reads of 2018. This is the kind of story people can connect with on multiple levels. For me, I’ve always been angry about all of the innocent people who’s lives are destroyed by religious cults and curious how the indoctrination process claims so many lives. As a non-religious person, I was always curious how people could get so ingrained into a religion’s policies no matter how strange or ridiculous they seemed to the rest of the world. Thanks to the incredible bravery of Wallace Jeffs defying his brother and the church he spent a lifetime serving, the world at large can garner a far better understanding of indoctrination as a whole.

The book goes into incredible and tragic detail on the religion and it’s actions. From the strange laws that dictated their appearance and interactions with the rest of the world, to the inner workings of polygamy and the apocalyptic beliefs that drove people to do or allow unspeakable things to occur. The book also allows readers to get better insight into the behavior and mindset of the sick religious leader who is deemed “prophet” in this religion, and that’s Warren Jeffs. Wallace and this incredible writing team showcase the rise of this criminal, whom his brother describes as “the most evil person to walk the earth”. From his early years being groomed to be the religion’s poster boy, to his sick pleasures and the mind games he played with the followers, including his own brother.

Overall this was an amazing book to read. Definitely one of the best books of 2018, Wallace Jeffs, Shauna Packer and Sherry Taylor have brought to life an emotional, heartbreaking and yet vital tale of escaping a toxic environment. You also get to see how he learns how to integrate himself into society years later than most and the physical and emotional struggle of one father who’s love for his children gave him the strength to fight the only group he’d called family to save his kids. This is a must read book, so be sure to grab your copy in eBook, audiobook or paperback formats on June 6th, 2018! 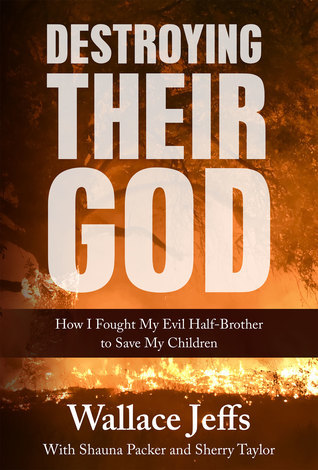 Happy Holidays everyone! To celebrate the upcoming season my @etsy shop @cosmicwritingstudios is having a #blackfridaysale now through December 1st. Grab 20% off all products and services on my shop. From custom poetry and short stories to character worksheets for #authors to original #shortstories and iPhone backgrounds based on my books, I have it all. So be sure to purchase your order today and if you have any questions don’t hesitate to email me or DM me here or on my shop page. Link in the bio! #blackfriday #sale #etsy #etsyshop #etsyseller #customwriting #christmasgiftideas #christmasgiftguide #holidaygiftideas
It’s a @cosmicwritingstudios #halloweensale over on @etsy so click the link in the bio to get 20% off all #writingservices and #digitalproducts !
Happy to share that my @etsy shop @cosmicwritingstudios is having a special #halloweensale now through November 2nd. All of my digital products and #writing services are 20% off. These include but are not limited to custom novels, custom poetry, and more. You can also find #author services on my personal website, such as expedited #bookreviews, #editing services and much more. Links to both shops are in my bio.
So happy to share that today @krisonrequest @alywiththecurves and my father surprised me and brought home a new baby pup. His name is Luke, as in Luke Skywalker ( @markhamill ) and along with his sister Leia they are both white haired #goldenretrievers . I couldn’t be happier and more emotional if I tried. Can’t wait to share their journey with you all. Look for their own socials soon… #starwars #goldenretriever #newpuppy #goldenretrieverpuppy
If you guys haven’t yet be sure to check out my #review of author @adrienneyoungbooks and her new novel #spellsforforgetting a great way to start out the #spookyseason 🎃🧙🏼#bookstagram #bookreview #mysterybooks
Happy Birthday Aly With The Curves! I love you mucho mucho. There is never a day that goes by where I don’t count myself lucky to have you in my life. Whether we are talking to ghosts, laughing at dumb TikTok videos, or belting out our favorite Disney tunes, I am forever grateful to have you not only as my sister, but one of my best friends in the whole world. You are not only beautiful, but so incredibly talented, creative, and I know the world is going to love the wealth of positivity and love you will share in the years to come. I hope you have a fun, exciting, and very Happy Birthday. I love you with all my heart! #happybirthday #sister
I want to wish my late grandparents a very Happy Anniversary. I know wherever they are, they are dancing the night away from the new home they have made for themselves in the afterlife. I love and miss you both mucho mucho, every day. ❤️❤️ #happyanniversary #grandparents
In case you missed it, my #review of my dear friend @rebeccahenryauthor latest book #ConjureLake is now live on my website. Please check it out, like and share the post, and be sure to grab your copy of this incredible book today! Link in the bio! #yaparanormal #youngadultbooks #lgbtq #lgbtqbooks #bookstagram
Also, a brand new #bookreview of @authoryasminemaher #Echo The Curse of the Blackwood Witches is now live. Link in the bio. Please share and subscribe to my website. #bookstagram #bookrecommendations #urbanfantasy #urbanfantasybooks
Happy to share what I hope is the first of many episodes of my podcast A World of Books that focuses on authors. I am so grateful to @karenmoeart for sharing her story and powerful book with us. Please like and share the episode using the link in the bio and if you haven’t yet, be sure to subscribe. Available on @applepodcasts, @spotify and all other streaming apps. #podcast #authorsofinstagram #bookpodcast #bookstagram #authorreading
I can’t even begin to express how much I already miss him. Today, the last of my #goldenretriever children, Jack, had to leave us and join his brothers over the #rainbowbridge. I won’t lie, it’s been a really difficult day. So many emotions to process as today marks the end of an era. He was with us for over 13 years, and through it all he never once stopped smiling, never stopped giving us constant love, especially when we were struggling, and he always had something to say when we were hanging out. I love you mucho mucho Jack, and daddy misses you dearly. I know you are with your brothers and sisters now, and I hope you know how much we love and miss you. Goodbye, my handsome Jack. ❤️❤️ #goodbye #missyou
Happy Birthday Mom! I love you mucho mucho. Through everything that has come our way, everything that has been tough and all the good times and bad, I’ve been so lucky to have you in my corner. You are not only my amazing mother but one of the best friends a person could ever hope for. I look forward to investigating haunted mines and Bigfoot sightings with you in the future, and I hope you have the best and most relaxing birthday ever. I love you with all my heart mom, to the moon and back, forever and always. Happy Birthday! ❤️❤️❤️❤️#happybirthday #happybirthdaymom