A galaxy of people forced into blind servitude and a family torn apart lead to a mission not only for survival, but to stop a threat more powerful than anyone could have possibly imagined in the final chapter of authors Lindsay Cummings and Sasha Alsberg’s duology “Nexus (The Androma Saga #2)”. Here is the synopsis.

Her ship is gone, her crew is captured and notorious mercenary Androma Racella is no longer the powerful Bloody Baroness, but a fugitive ruthlessly hunted across the Mirabel Galaxy. The bloodthirsty Queen Nor now rules most of the galaxy through a mind-control toxin and she’ll stop at nothing to destroy her most hated adversary.

Andi will risk anything, even her precious freedom, to find a cure. Stranded with her unlikely ally, Dex, on the unforgiving ice planet of Solera, their plan to infiltrate a black-market city proves dangerously irresistible.

Back in Arcardius, Nor’s actions have opened Mirabel to invasion. As Andi’s crew fights to regain their freedom, Andi and Dex discover a threat far greater than anything they’ve faced before.

Only by saving their mortal enemy can the crew of the Marauder make one last desperate strike to save the galaxy—unaware that a shattering, centuries-old secret may demand the most wrenching sacrifice of all.

This is the perfect ending to a phenomenal YA Sci-Fi thriller. Put up against nearly impossible odds, a feared and strong criminal turned hero is forced into an impossible position as she yearns to free the crew she considers her family, while a threat building behind the scenes for decades begins to slowly reveal itself, and the threat of Nor soon makes way for a devastatingly sinister plot that only Andi can stop.

The action and suspense the plot brings are superb in their delivery, as is the growing mythology behind the Mirabel galaxy and its people. Readers are instantly enthralled with this growing world, which brings a mixture of Star Wars meets Firefly with a YA twist. Yet it’s the characters of this novel that truly define the book’s power, as the story feels personal and heartfelt as the protagonist showcases a love for her family that goes above and beyond any responsibilities placed upon her. Family is what defines this story, in more ways than one, and the ferocity with which Andi is willing to fight to save her family showcases the path of any great sci-fi hero.

This is a must read summer YA book for any fan of the YA sci-fi genre. Filled with action, passion and a deep rooted mythology that fans will instantly become obsessed with, the shocking conclusion to the tale will leave readers on the edge of their seat. While the story may officially be over for the Androma Saga, the characters and their love for one another are what will live on in readers hearts as they go on this final journey with the Bloody Baroness. If you haven’t yet, be sure to pick up your copy of Nexus by authors Sasha Alsberg and Lindsay Cummings today!

Sasha Alsberg is the #1 New York Times bestselling coauthor of Zenith, the first book in The Androma Saga. When Sasha is not writing or obsessing over Scotland, she is making YouTube videos on her channel, Abookutopia, and studying history at university. She lives in Massachusetts with her two dogs.

Lindsay Cummings is the #1 NYT Bestselling Co-Author of Zenith: The Androma Saga. She is also the 24-year-old author of The Murder Complex duology and The Balance Keepers trilogy for HarperCollins. She lives in North Texas, where she writes full time. Lindsay is represented by Pete Knapp at Park Literary & Media. Find out more about Lindsay and her books, and get writing/publishing advice on her website. 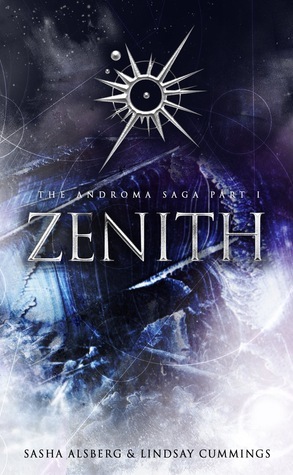 Imagine if science fiction cult classics such as Joss Whedon’s Firefly or the visceral story of the hit gaming series Mass Effect, and then you
put a YA spin on both franchises, then you’d have this soon to be fan favorite YA Science Fiction book Zenith (The Androma Saga #1) by Sasha
Alsberg and Lindsay Cummings. The fresh voice of Sasha Alsberg when combined with the seasoned voice of author Lindsay Cummings makes for one
of the most adrenaline fueled, heavily character driven YA stories I’ve read.

There is darkness sweeping across the stars.

Most know her as the Bloody Baroness, the captain of a fearsome glass starship called The Marauder. Androma and her crew strike terror in the
hearts of those who cross them amongst the many corners of the Mirabel Galaxy.

When a routine mission goes rogue, the all-female crew is captured by a bounty hunter from Andi’s past and forced into a job that could, quite
literally, start a war that will devour worlds.

Meanwhile, on the far side of the galaxy, the ruthless ruler Nor waits in the shadows of the planet Xen Ptera, biding her time. The final pieces
are about to fall into place, liberating a plan that will tear Mirabel in two.

As the Marauder hurtles toward the unknown, there is one lesson that proves to be true: No one can be trusted in a galaxy that runs on lies and
illusion.

Now as both a newcomer to the YA genre and a fan of science fiction, I was already excited about the release of this book. What really sets this
book apart is that there is no set good guys in this story. The protagonist of this story, Androma, the Bloody Baroness, is a feared outlaw who
isn’t afraid to get bloody and kill to accomplish her goals. While there are even deadlier threats in the galaxy, she isn’t ruled by an overwhelming
sense of honor or duty, but rather very real human emotions and complicated histories that have shaped her into the person she now is. It was
refreshing to see a predominately female driven book that showcased how men aren’t needed to have an action-fueled adventure.

The pace of this first story is very fast, and the complicated history the characters bring to the book immediately hook the reader in, to the
point where I finished this book in one day and am ready for a second go. In just a few pages, the reader immediately gets a sense of just how
large this galaxy is, and the bubbling conflict that is sure to consume it with just one conflict. Overall, this is one of the most promising new
YA series that both YA readers and science fiction readers will want to consume now. By the end of the story, readers will be eager to sink their
teeth into The Androma Saga #2, so be sure to pick up your copies of Zenith (The Androma Saga #1) now and help support authors Sasha Alsberg and
Lindsay Cummings to get more of their incredible work out in stores now! Be on the lookout for an official video review on my channel, Avina
Vlogs, soon!