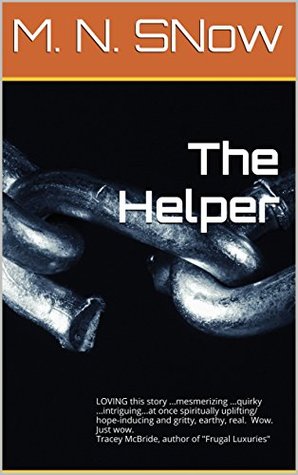 An emotional story of hope, love and the power to help, and what people do with that power. That is how I would describe The Helper, a fantastic
novel written by author M.N. Snow that explores the story of three people with unique abilities that allow them to help others, and the
complicated lives they lead because of it. First, here is the official synopsis:

A tale that combines contemporary, speculative fiction with an ambiguous spirituality. The book explores relationships between lovers, friends,
families, and what Powers of Good there may be.

John Sloan is an ex-Marine with a life-long secret that is haunting him. He is a conduit to a healing light that draws him to people on the
brink of emotional disintegration, people who are then healed and Helped by this light. His blue-collar world is shattered when he finds that
his connection to this anonymous portal has vanished. He is alone, seemingly beyond aid, and in desperate need of a Helping himself.

The book tracks the intersecting lives of John and two other Helpers. His lifelong friend Dusty Hakalla is a mixed-blood Ojibwe, with a secret
of his own. His power to Help is remarkable, but was once destructively misused. A career Marine, his scarred childhood and momentary abuse of
power have left him jaded and bereft. Deena Morrison, also a Helper, is John’s girlfriend. Adopted as an infant, she flees John to find her
birth-mother, while carrying within herself her own secret. Another character shadows their lives as narrator, Nan’b’oozoo, the trickster god of
Ojibwe legend—at times sarcastic and petulant, at others insightful and humorous.

The novel travels from the gritty Lake Superior port-cities and Indian Reservations of northern Wisconsin to the Jewish neighborhoods of North
Miami Beach, Florida—from Parris Island to the war zones of Kuwait and Afghanistan.

The story of John, Deena and Dusty is packed full of emotional stories that jump back and forth through time thanks to the narrative storytelling
of the narrator. Watching these characters grow up separately in very different circumstances, and seeing their very different approaches to the
gift of Helping was gripping to read. This is an incredibly well-written story, that often reminded me of the same storytelling style of
Stephen King, creating eloquent plot lines with realistic characters that spoke of the various types of people you’d expect to meet in these
places and time periods written about in the book. Getting to see the impact this force of good has on these individuals, and getting to see protagonist
John give so much of himself to others, only to discover he is the one in need of Helping once his power seems to disappear, taking pieces of
himself slowly and painfully as well.

Analyzing the impact of war, racism, violence and the struggle to remain good in a world that constantly threatens to overwhelm people with evil
and darkness, The Helper is a phenomenal read that deserves to be read. The passion that this story is told with showcases a strong command
over the narrative, and author M.N. Snow showcases a talent that is too bright not to be recognized. Filled with romance, friendship and the
constant struggle to remain good, this is a powerful book that everyone should get, so be sure to pick up your copies of M.N. Snow’s The Helper
now!

Brand new #bookreview is now live on my website. I preview and review @baldbeardedbard first volume of the hit #graphicnovel #villainous from @madcavestudios so be sure to check it out! Link in the bio. #graphicnovelreview #comicbooks #comicbookreview #comicbooknerd #comicbookreviews
Days 29 & 30 of #authorlifemonth2021 is here. I hope you have enjoyed this month of content. I look forward to bringing these upcoming projects to life and I cannot wait to share them with you all. #authorlife #authorlifemonth #authorsofinstagram #writinggoals #writingproject
Have you read my latest #bookreviews on my website? One fantastic book I just read was Never Never by the incredible @lunaloveliz and I highly recommend you check it out. It’s an adult #horrorthriller and #fantasybook that includes the iconic #peterpan lore and some ties to the #greenman himself, #Pan which gave me some #hellier vibes immediately lol 😂 be sure to click the link in the bio to read my latest reviews including #NeverNever now! #bookstagram #bookreviewsofinstagram #bookreview #booklover #booknerd #bookstagrammer
I wanted to take a minute to wish my late grandmother a happy birthday. She would have been 92 today. It’s been a couple of years since we lost her, but it feels like it was just yesterday when I spoke to her on the phone last. I love you mucho mucho grandma and miss you so much. I know you’re with us today and I hope you have a great birthday. I know you’ll be dancing amongst the stars with grandpa tonight. ❤️❤️ #happybirthday #remembrance #happybirthdaygrandma
Day 28 is about dedications, and I decided to share my dedication from my book Identity. I know the support and love of my family, friends and publishing team mean the world to me. #authorlife #authorlifemonth #authorlifemonth2021 #authorsofinstagram #bookdedication #dedication #author #bookstagram
I’ve had a busy week but here goes nothing. Days 23-27 of #authorlifemonth2021 starts with day 23, my prized possession right now is the signed poster and gear from the amazing crew of #hellier . Day 24 is my inspiration and I’m going to assume that means my writing inspiration, which of course is #stephenking himself. Day 25 is treat yourself, and for those who don’t know I have to eat #glutenfree due to Celiac’s Disease, so my go-to treat is anything from @katzglutenfree for sure. Day 26 is all about research, which right now is about obscure #fantasy creatures for my upcoming novel. Finally day 27 is about a non-professional photo, so here’s me with my amazing new long hair! How’s your week been? #authorsofinstagram #authorlife #author
A few days behind on #authorlifemonth2021 so here it goes: Day 20 is about author friends, and two friends I’ve made this past year and a half, almost 2 years is @rebeccahenryauthor and @louis_k_lowy who have been so supportive and awesome. Day 21 is my first prized bookish possession, and although they’re packed away at the moment my favorite is my #darktower collection by #stephenking . Finally day 22 is about other favorite media, and for me that includes #starwars #mcu #hauntingofblymanor #masseffect and of course #hellier , all amazing projects and so inspiring creatively. #authorsofinstagram #authorlife #authorlifemonth
Day 19 of #authorlifemonth2021 is all about favorite first lines. I wasn’t sure what direction to take this so the first picture is my favorite first line from the projects I’m working on. It’s a #yafantasy and #scifi #horror series and I love how this establishes the action right away. The second is my favorite line from my favorite book, #stephenking #thedarktower book 1: the gunslinger. #authorsofinstagram #authorlife #authorlifemonth
Day 18 of #authorlifemonth2021 is all about non-bookish hobbies. I already talked about my passion for the paranormal so my other hobby is gaming. The best way to escape for an hour or 2 and get lost in the action and story of a game. It’s also inspiring and fuels my creativity for writing later on. What’s a non-bookish hobby for you? #authorsofinstagram #authorlife #authorlifemonth #gaming #videogames #xbox
Day 17 of #authorlifemonth2021 is all about dream writing retreats, and for me that narrows down to 3 places. If money wasn’t a problem, I’d visit the rich cultural hub of London, sit in a Scottish castle writing with a view of the highlands or visit the amazing coastal regions of Ireland. History is a big passion and inspiration for my creativity and these places would be amazing to delve into my writing in. What’s your dream location for a writing retreat?
I have been swamped with work lately but here are days 14-16 of #authorlifemonth2021
“She's the girl next door. He's a man of law and order. Can the love of an orphaned child bring them together?”