1) Tell us a little bit about yourself. How did you get into writing?

I grew up in Toronto, Ontario and moved to Vancouver, British Columbia to attend university. Within days, I knew I’d make the west coast my home. I fell in love with the mountains and the ocean and the vast rainforest. Where else can you ski, sail, and hike on the same day? I studied business and worked in human resources after I graduated. When we moved to our current home on Denman Island, I took a five-year hiatus to travel with my husband.

I started writing professionally after we returned to the west coast. We’d spent five consecutive winters in the sunny south, two in Mexico and three in Arizona. It was late fall, and after we unpacked and settled back into the house, I found myself staring out at the cold, grey, rain-drizzled deck. The days were still getting shorter and the wet weather had just begun. I knew I needed to do something to keep from going stir-crazy. That’s when I started forming the story that would eventually become Secret Sky. And though there have been many bumps along the road since then, I’ve never looked back.

2) What inspired you to write your book?

While I was travelling, I got thoroughly hooked on urban fantasy. There were days I couldn’t put my book down—I’d be stirring a pot with one hand and holding a book in the other. I loved the idea of magic, supernatural abilities, and the paranormal. So, my inspiration were authors I was reading at the time, Deborah Harkness and her All Souls Trilogy, Charlaine Harris’s True Blood series, Diana Gabaldon’s Outlander, JR Ward’s Black Dagger Brotherhood, Jim Butcher’s Dresden Files, and anything by Terry Pratchett or Neil Gaiman.

3) What theme or message do you hope readers will take away from your book?

If there is a message in these books, it’s perseverance. It’s about getting back up when you’re knocked down. It’s not giving up when you make mistakes but carrying on. I hope I’m able to capture the readers’ imaginations and create a sense of magic for them, an escape, a little vacation from the daily grind.

4) What drew you into this particular genre?

I’ve always been keenly interested in the supernatural, the paranormal, and magic. I’m especially drawn to stories where the supernatural walk among us. I think that’s because I would love to possess those supernatural abilities—oh, to be able to fly! And when supernatural beings are hidden within everyday society, then maybe—just maybe—they really exist. That feeling of possibility is what I want to create in my writing. It’s escapism, and we could all use a little more of that.

5) If you could sit down with any character in your book, what would you ask them and why?

I’d like to sit down with Jolene Reynolds. She’s the woman who gifted Emelynn her supernatural abilities. When Jolene gifted Emelynn, she risked her own life. The transfer would have left her physically weakened and the odds are against her survival. The books haven’t told Jolene’s story (or not yet!) so if she survived, I’d like to ask her why she gave her gift away. I can’t imagine the emotional struggle and the pain she endured to get to the point where she’d give away such a wondrous gift, and risk her life to do so.

6) What social media site has been the most helpful in developing your readership?

It’s difficult to trace where the readers originate. My two main platforms are Twitter and Facebook. I probably have more engagement on Twitter, but people know me better on Facebook. So, it’s a tossup. Writers who are wiser than me suggest sticking to one platform that you enjoy and giving it your full attention. Wish I could be more helpful.

7) What advice would you give to aspiring or just starting authors out there?

Write what you love because writing takes endurance. You’ll need to love what you’re writing to push through the inevitable difficult patches. And don’t wait for a big idea or the entire story. Write that one scene that is stuck in your mind or create that one character. You’ll be surprised how that simple act will spur your creativity.

8) What does the future hold in store for you? Any new books/projects on the horizon?

Yes! I’ve just finished writing a new book called Blood Mark. It’s the story of a young woman who bears a chain of scarlet birthmarks. The birthmarks are disfiguring, so she’s thrilled when, one by one, the marks begin to disappear—until she learns that the hated marks protect her from a mysterious and homicidal enemy. Now, she’s in a race against time to find this dangerous enemy before her last mark vanishes.

JP (Jo-Anne) McLean is an urban fantasy and supernatural 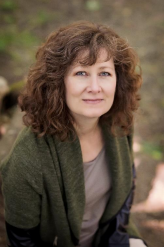 thriller author best known for The Gift Legacy series. The

first book of the series received Honourable Mention at the

Her books include endorsements from Ethel Wilson award

Elinor Florence. The series has been described as fantasy

light and is a good introduction to the genre for the

JP’s body of work was included in the centennial anthology

Federation of BC Writers and the Alliance of Independent

Authors. Her articles have appeared in WordWorks

Jo-Anne holds a Bachelor of Commerce Degree from the University of British Columbia’s Sauder  School of Business, is a certified scuba diver, an avid gardener, and a voracious reader. She had a  successful career in Human Resources before turning her attention to writing.

JP lives on Denman Island, nestled between the coast of British Columbia and Vancouver Island.  Raised in Toronto, Ontario, JP has lived in various parts of North America from Mexico and Arizona  to Alberta and Ontario before settling on Canada’s west coast.

You can reach her through her website at jpmcleanauthor.com.