It is my pleasure to be the latest stop on the fantastic blog tour for Derek Philpott’s novel Dear Mr. Pop Star. Before we get into the review, here is what the book’s about.

A collection of hilarious letters to iconic pop and rock stars with fantastic in-on-the-joke replies from the artists themselves: Eurythmics, Heaven 17, Deep Purple, Devo, Dr. Hook and many, many more… 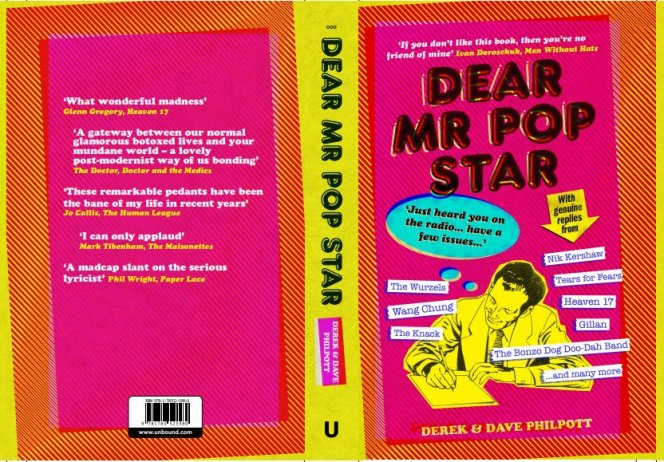 Now, onto the review.

How often has this happened to you? You are sitting in the car, bopping your head along to one of your favorite hit songs, and you suddenly start to think about the lyrics. You start to wonder, what does that lyric mean? What was the artists trying to convey in that moment? Well author Derek Philpott took this idea, and wrote an entire book detailing letters he wrote to several artists and bands and their responses in his novel “Dear Mr. Pop Star”. Here’s the synopsis:

For nearly 10 years, ‘Team Philpott’, as their followers fondly refer to them, have been on a quite bonkers crusade, writing good old-fashioned letters to pop and rock stars (sometimes even sent to their home addresses with prior consent!), either picking up on genuine ambiguities within their lyrics or often deliberately misunderstanding them for comedic effect.

The letters are eminently publishable in their own right, mixing sharp wit, confusion, and unarguable logic in relation to questioning the offending chart hits under scrutiny.

What makes this project especially deserving of attention, however, is that it has achieved a feat never before attempted or probably even thought of. With the missives online for all to see on what was becoming a hugely popular website, the artists quite unexpectedly started to reply, writing back in just as witty and articulate a fashion, politely pointing out exactly where the original letter went wrong…or right.

Also, crucially, nearly all of the responses were procured via ”the back door of the industry”, via roadies, mutual fans, cousins of bass players, and even other famous participants telling the artists directly of the Philpotts’ written pressing inquiries. This marvellous online community, which stretched as far afield as Europe, Canada, Japan, the U.S.A, Australia and Stoke, even cultivated and organically evolved the whole surreal venture by offering up willing stars that the authors would probably not have thought of corresponding with themselves, establishing contact through personal connections.

‘Dear Mr. Popstar’’ proudly features nearly 100 of the best letters and responses from famous and legendary names spanning the whole pop and rock spectrum, all relishing their involvement and revealing their own, in many cases, hitherto unknown humorous sides within what could well be the most interactive dialogue compiled between music stars and their audience ever undertaken. Of course, it is not always possible to reach certain targets, hence many unanswered observations are also included, as they were considered too amusing not to be.

Ultimately, this book explores how when a song is released into ‘the wild’ the artist loses all control over it, especially pertaining to its interpretation. It is also testimony to the community spirit capable of being created over social media and how positive and fun it can be.

I have to say, this was one of the most enjoyable books I’ve read in a long time. The humorous interpretations of these songs not only had me laughing but sometimes thinking about the lyrics in those songs and questioning things. Equally entertaining were the responses from the artists themselves. For instance I loved the letter to and from Tears for Fears about their hit song “Head Over Heels”. I love that song as it’s a classic, but not only hearing the author’s hilarious theory about the lyrics discussing things like chem trails and asking to meet in a public place rather than in private had me laughing out loud, while the band’s response detailing the incident that led to the song’s lyrics, including a failed attempt to ask a local weather girl out on a date that literally had the singer tripping and having his “head over heels” moment.

The book is incredibly witty and well written. The style of posting the author’s letters in the book as if on a professional stationary and then incorporating the artist’s responses was a stroke of genius on the author’s part. Music is a huge part of my life, as I not only write reviews for artists and incorporate music as inspiration for my own writing, but have music on constantly throughout my normal everyday life. Getting to see such a humorous and intimate look into popular songs and artists was a thrilling read to encounter.

This is a must read book! A hysterical, laugh riot that gives pop and rock fans alike a fresh perspective on their favorite artists, bands and songs, Dear. Mr. Pop Star is a fun filled ride through music history. Author Derek Philpott does a wonderful job of weaving these letters together in a funny way, and the contributions of the artists themselves makes this a true page turner like no other. If you haven’t yet, pick up your copy of Dear Mr. Pop Star by Derek Philpott today!

Derek and Dave Philpott are the nom de plumes of two ordinary members of the public, working with help from a small family and, crucially, a worldwide social networking community. Neither they, or anybody assisting with the creative aspects of this project had any connections with the music, entertainment, media or publishing industries whatsoever at the time of its commencement. Despite these humble origins, however, they now find themselves in the bizarre but enviable position whereby many pop stars and people within these circles are their friends “in real life’” (whatever that means!). Many artists consider “getting a Dereking” as a badge of honour, and, as one has participant succinctly put it-

‘’This is an ingenious and extremely inventive concept. You have given us a platform to answer questions that have been asked of us for years by our fans, and respond on a public platform of immense fun. You’ve created a weird and wonderful world loved and admired by 1,000s of people worldwide, and you have your own army of loyal fans. That pretty much makes you part of ‘us lot’ now!’’

I found your song on the internet whilst looking for how to get to friends in Hazeldene, Chieveley.

In these celebrity and appearance-obsessed times it is admirable that you are searchin’ (looking for love) for a man who needn’t be handsome or have fortune or fame.

I fear however that you may be setting your sights a bit low, Ms Dean. You appear, rather than ”looking for someone to share your life” with’ on nights out with friends or on tentative dates, to be ”seekin’ ” a long-term partner either on the train, or, more worryingly, as reinforced by your disclosure that you ”want no disguises”, a Police I.D. Parade, as you ”move on down the line”.

It is suspected that your judgement may have been impaired by ”never sleepin”’ and that there is no guarantee that a stranger on the Underground, or for that matter, from the Underworld is likely to be ”sweet and kind’.’

”Whatever You Do, Wherever You Go”, Ms. Dean, I implore you to be cautious in your quest and not to explore ”every place you can”.

Think not of “Searchin’” as a light-hearted missive, extolling the virtues of promiscuity.

No! This work should be considered a seminal piece – a late 20th Century celebration of the seeking of love above all else.

All the time I can.

This is not a transient pop song, but should be compared as contemporary to the popularist lyrics of Byron, Browning, Rossetti and Wilde.

Were these great romantics ever concerned by the trivialities of sleep sir? I think not.

As the great Oscar Wilde himself wrote:

“You don’t love someone for their looks, or their clothes, or for their fancy car, but because they sing a song only you can hear.”

Additionally, aspersions cast on my predilection for members of the criminal fraternity are most unwelcome and unfounded,and I would therefore be grateful if you could leave me to my insomnia and romantic musings in peace.

Further to this, over the past 35 years I have received 100’s of photographs of dull establishments bearing any vague semblance of my name, in its many variants. The highlights of which include a B&B in Blackpool, and cattery in Crewe and a hovel somewhere slightly South of Brighton.

Why people presume these will interest or even slightly amuse me, I do not know.

Would you enjoy receiving a steady and annually persistent selection of “Philpotts Avenue’s”, “Philpotts Crescents” and “The Philpott Home for the Perpetually Ridiculous”? The novelty wears off very quickly I can assure you.

Quite frankly Mr Philpott the locating of your friends at Hazeldene, Chievely, is of absolutely no interest to me whatsoever.

You can find the book and the author at the links down below, and be sure to check out the official blog tour graphic to see where the blog tour will be next!

Anthony Avina, (Born March 1990), is an author, a journalist, and a blogger. Born in Southern California, he has battled through injuries, disabilities, moves back and forth across the country, and more, yet still maintains a creative voice that he hopes to use not only to entertain but to inspire hope in even the darkest situations. He writes short stories and novels in several genres, and is also a seasoned journalist for the online magazine, On Request Magazine, as well as the popular site TheGamer. Having grown up reading the books of Dean Koontz and Stephen King, they inspired him to write new and exciting stories that delved into the minds of richly developed characters. He constantly tries to write stories that have never been told before, and to paint a picture in your mind while you are reading the book, as if you could see every scene of the book as if it were a movie you were watching. His stories will get your imaginations working, and will also show that in spite of the most despairing and horrific situations, hope is never out of reach. He am always writing, and so there will never be a shortage of new stories for your reading pleasure. http://www.authoranthonyavinablog.com