In a world where politics has taken a much larger role than ever before, politically charged works of fiction are becoming much more prevalent. One such book stuck out to me, and that was the graphic novel series USNA: The United States of North America. In both books one and two of the series, the future is dominated by advanced technology and a continent formed into one nation, and a small group of rebels who hope to return their nation to the people, and not the military council that now rules. Here is the synopsis:

An action filled multi-character drama, this graphic novel tells about a time in the future when our two great countries, Canada and the United States, have amalgamated and there is a growing discontent. Family farms have been replaced by huge corporate farms that exploit the bulging prison populations for labor. Severe drought has led to food shortages and rationing in the cities. Young adults are being conscripted to fight in the Cent-Am wars while a groundswell of rebellion is building. The rebels want to return to a time when the policies of the government represented the best interests of the people, not the best interests of those who govern. To lead their movement, the rebels are planning the return of their leader, the exiled former prime minister of Canada, Samuel Stern. To combat this threat, a new organization has been created by the administration of USNA. It’s a covert homeland security force: the Strategic Home Alliance Defense Organization (S.H.A.D.O.). Operating on the fringes of the law, their mission is simple: locate and eliminate any rebel activity using deadly force if necessary. This is the story of the people’s fight against tyranny in our own backyard. 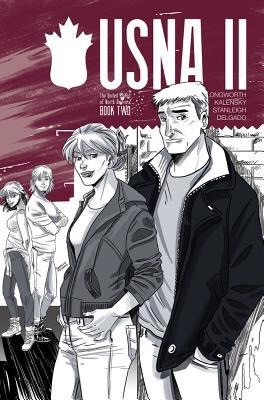 A mixture of science fiction, political fiction and espionage thriller, this story showcases a future where two nations become one, and the rule of law makes corporations the dominant force, not the lower class who help build businesses or the farmers who’s entire lives depend on the land they farm. This graphic novel series does a fantastic job of showing multiple points of view, from the naive widow who is shown the real world for the first time to the optimistic rebel leader to the tough as nails military general who is as ruthless as he is cunning.

The artwork in this graphic novel is beautiful, bringing a sort of noir realism like Frank Miller’s Sin City to a fast-paced, action packed world where boarders have all but evaporated on our continent. The plot is both familiar and new, exploring a new topic but giving a reassuring formula of a small, ragtag group of rebels who must become heroes to free the people under the corrupt thumb of a military based government.
Overall, this is a must read graphic novel series, which showcases the lengths a government may go to exert control over a nation and the strength of the men and women who yearn to give freedom back to the people. USNA: The United States of North America is a wonderful series from a talented group of writers and artists who I hope to see more work from in the future. Pick up your copy of USNA: Books One and Two today!
USNA: The United States of North America https://www.amazon.com/dp/098097013X/ref=cm_sw_r_cp_api_X.-MzbPXS8CK8

Day 9 of #authorlifemonth is all about coping with COVID. Aside from writing, gaming and being with my family, the biggest thing that I’ve done to cope is deep dive into my passion for the paranormal. From writing articles on @medium to starting a #paranormal #podcast called @phenomenonaparanormalpodcast and being inspired to research more thanks to #hellier and the amazing team who inspired me, I’ve never been more inspired than I am now. Now we’re going to be launching our @youtube channel soon with our first #paranormalinvestigation of @allsaintslunaticasylum and I couldn’t be more at peace beginning my paranormal career. It’s been a dream of mine and it’s helped me to cope with the pandemic greatly. #authorsofinstagram #authorlife
Day 8 of #authorlifemonth is an intro to one of my main characters (MC). I’m going to use this stock photo as my inspiration for the main character of my Nightmare Academy series, Francesca.
Day 7 of #authorlifemonth is a #shelfie and here is mine. I’m in the middle of rearranging things so this isn’t my permanent shelf look. #authorsofinstagram #authorlife #bookstagram #bookshelf
#authorlifemonth day 6 is all about #teasertuesday and I’m happy to share my latest project, a re-written version of book 1 of my #NightmareWars series. New title, added storylines, and completely remastered. Work in progress but can’t wait to share one of my favorite universes I’ve crafted. #workinprogress #authorlifemonth2021 #authorlife #actionhorror #fantasyseries #paranormalseries #newadultbooks
Day 5 of the #authorlifemonth challenge is my writing space. Right now this is where I’m writing. I’m in the middle of some things that have taken me away from my desk setup, so this is my writing home for now. #writingspace #authorsofinstagram #author #authorlife
For those that celebrate I hope you have a wonderful and safe #Easter together. I’m a day behind but here are days 3 & 4 of #authorlifemonth . Day 3 is my writing fuel, which is typically coffee in my current favorite mug from #stephenking #theshining . Day 4 is my background noise or music, which for me lately has been @macfarlaneseth and @lizgillz latest duet album. #authorsofinstagram #authorlife #author
Day 2 of the #authorlifemonth and it’s all about me, something I rarely talk about.
In honor of #authorlifemonth from @missdahlelama here is my day 1 post. This is a couple of photos with my self published novels, Identity and I Was An Evil Teenager, (available now using the link in the bio). This year my goal is to add a couple more books to my collection, and to get a literary agent. Here’s hoping...#authorsofinstagram #literaryagent #mybooks #authorlife
I’ve been busy catching up for weeks on #bookreviews on my website, and today is an exciting day as I was able to review @hjramsay #everalice for a fantastic #audiobook tour. It’s a sequel of sorts to #lewiscarroll ‘s #aliceinwonderland . Check it out using the link in the bio.
I’m excited to return fully to Instagram. I had an unexpected hospital stay this month that delayed me from writing and being online for a bit. However I now have a new short story on @wattpad set in the world of my novel Identity. It’s the first in a series of short stories featuring new serial killers within that thriller universe. Click the link in the bio and check it out now! #horror #horrorthriller #horrorbookstagram #thriller #thrillerbooks
Happy #worldbookday everyone! To celebrate I have a special one day sale on my book #identity live on @smashwordsbooks for half-off. Grab this special deal now using the link in the bio. I’ll be posting some more content for #worldbookday2021 later as well.
I just wanted to take a moment to wish my father a very Happy Birthday. You have always been a source of strength for our family, and we love and appreciate everything you do for us. We all hope you enjoy your day today and know how much we love and support you. Happy Birthday homie.