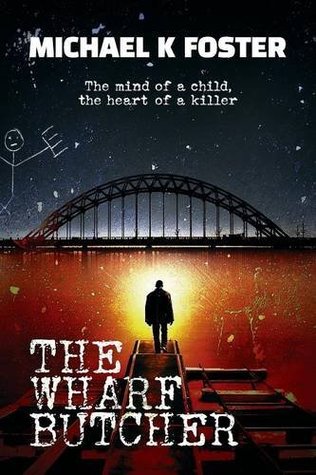 Disclaimer: I received a free copy of this book from the author and Booklover Catlady Publicity in return for a fair and honest review.
Many thanks!

Have you ever wanted to find a book that perfectly embodied the spirit and format of such great shows as Broadchurch and Sherlock? Then look
no further than author Michael K. Foster’s incredible novel, The Wharf Butcher. An intense crime thriller that does an excellent job of analyzing
character growth and showcasing the deep emotional scars that make a monster in our society, this is a fantastic read!

A serial killer is stalking Tyneside. But there is a pattern to his killings, his choice of victims, his method of slaughter. David Carlisle, a
criminal profiler, is brought in to assist DCI Jack Mason with his task of identifying the killer and stopping him in his tracks. The Wharf
Butcher is a fast-paced thriller that shines a light on the dark forces at work within the corridors of power, in the board room and the police
force itself. The clock is ticking to catch the monster that has been unleashed. But first Carlisle must get inside the killer’s head…

Combining the intrigue of a whodunit with the disturbing nature of serial killers and the emotional core of a great television drama, the first
novel in the building series focused on two intriguing new investigators is a smash hit from the opening pages all the way to the shocking
conclusion. The depth for which the author explores each side of a murder investigation is phenomenal to read, and not only do we get glimpses
into the personal lives of the investigators and how their lives affect their work, but readers will love to get into the gritty dark side of
the mentality of this serial killer. Will the investigators be able to stop this killer before it’s too late? Be sure to pick up your copies of
The Wharf Butcher by Michael K. Foster today to find out!

Yesterday would have been my late grandfather’s 93rd birthday. It is never easy having to celebrate without him here, but I know he was there in spirit. In honor of his special day I made an entire #mexicanfood dinner. Homemade #enchiladas with chorizo con queso. My grandfather loved Hispanic food and I’m so proud of my heritage and hope this honored him. Happy Birthday Grandpa! Love and miss you mucho mucho! ❤️❤️ #happybirthday
I want to wish my beautiful mother a very happy #mothersday! Mom, I love you mucho mucho. Through the good times and the bad, I always feel safe and loved knowing you have my back. I am so lucky to have you in my life. You are one of the best friends I could ever ask for, and the greatest mom around. Have a relaxing and wonderful day, and I look forward to celebrating with you soon. #happymothersday #mothersday2022
In honor of my late grandmother’s birthday, I have written this poem. She would have been 93. Happy Birthday Grandma! I love and miss you mucho mucho! ❤️❤️❤️❤️
If you haven’t yet be sure to check out today’s latest review. #amethyst by @rebeccahenryauthor #yabooks #yaparanormal #yafantasy
So thrilled to share this amazing #presskit from @pccastauthor for the upcoming book, #IntotheMist coming out this July! #bookstagram #mustreadbooks #upcomingbook
Looking for a great YA or horror-themed read this spring? Check out the exclusive Read an eBook Sale over on my Smashwords page now! All 4 books listed there are 50% off now! From acclaimed books like I Was An Evil Teenager to my YA novellas Nightmare Academy series and more, grab your copy today! #booksale #books #sale #thriller #YA #horror #readanebookweeksale
#romancethriller #thrillerromance #romancebooks #thrillerbooks #Catalyst
#paranormalromance #supernaturalromance #bookstagram #bookrecommendations #CaptiveWilderness
#mystery #romancebooks #thrillerbooks #bookstagram #Lure
#selfimprovementbooks #nonfictionbooks #bookstagram #TheWindsorMethod
#financebooks #nonfiction #bookrecommendations
Check out my review of Jenna Greene’s #Reborn