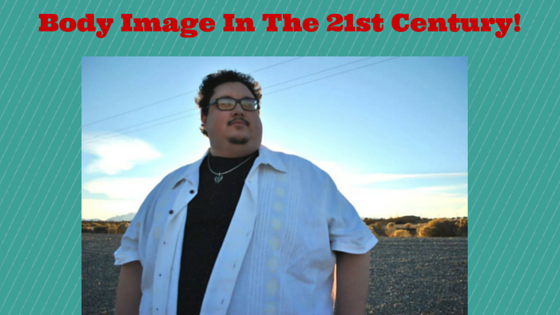 Body Image in the 21st Century:

Have you ever thought about body image? I’m sure 99% of you guys out there probably have. Whether you’ve struggled on one end of the
spectrum or the other with weight, height, or some other identifying marker, body image is on most people’s minds. As a society, I like to
be positive and think that we have begun to mature, and to realize that we are all equal and beautiful, no matter what our race, body image,
background, sexual orientation or anything else that makes us unique. However, from time to time I’ll come across someone or something that’s
said that pins a certain group of people in a negative body image and light.

I happened to be online today, (I know, big shock!), and while I was on Facebook I saw a YouTuber I enjoy watching, Meghan Tonjes, post a video
in response to a video called Dear Fat People. Now, immediately the title of the video she was responding to conjured up some negative
connotations. As a big person, I generally don’t like to refer to heavy-set people as fat. When the word fat is generally used, it’s used as
an insult or in a derogatory sense. Upon watching the emotional, tearful video response by Meghan, I soon learned the concept behind the
video, and found my hesitation about the video was not for naught.

The video was made by a YouTube comedian named Nicole Arbour. While I don’t watch her videos much, I had seen bits and pieces of her throughout
social media and at the time had been considering giving her channel a shot. After watching her video however, I found myself instantly
writing her off. The video is supposed to be shot in a satirical voice. However the video comes across more like a young woman who berates
obese people into stopping their bad habits and does it supposedly out of love, to help people out. This is of course the most narrow-minded,
obtuse way of thinking I’ve seen from a YouTube entertainer thus far.

Now I’m a big believer in the YouTube community. I am not only a fan, but I’m a part of that community as well, having vlogged my daily life
for the last two years. So my criticism is in no way meant to hamper the YouTube community. The same goes for the people who happen to be
thin, skinny, thin yet curvy, or anything less than heavy set. In fact, the whole point of this blog post is to promote a healthy body image
for all people, no matter what. This is not to put down thinner people at all. This is directed at a single individual and the individuals
who promote this mindset.

Now, Nicole Arbour since the video has come out and said that if people don’t appreciate her brand of comedy, then they don’t have to watch
her videos. This is very true. Watching her videos or her posting videos in general is not my problem here at all. No, the problem I have
is the message she’s choosing to send to the thousands of people who watch her videos. Her attitude and behavior in this video suggest that
people who are obese, heavy-set or anywhere in that department should be ashamed of themselves. You can nearly hear the disgust in her voice
as she goes on what seems like a tirade about obesity.

A couple of things. First, if she doesn’t feel this way and did it purely out of comedy, then she needs to work on her timing, her voice
when presenting the jokes, and the wording of said jokes. However if this is something she truly believes, then she is promoting an unhealthy
body image. She says at the beginning of her video that fat shaming is something fat people made up. In the first few seconds of her own
video, she proves her unlimited narrow-mindedness to the world. When a person puts themselves out there in hopes of being an entertainer,
and garners a large audience of any size, they take on a responsibility, whether they like it or not. They are responsible for influencing
thousands, maybe even millions of lives who have decided to give them their attention.

Therefore, Nicole Arbour has seriously failed in her responsibilities. In this modern age, she has displayed some old world thinking. Unless
she is in fact a medical doctor and knows all of the various illnesses, disabilities, or mental factors that can cause obesity, (including
each and every persons personal home lives), then she has nothing to back up the facts she states in her video. Despite the causes of
obesity or a heavy-set image, no amount of finger-pointing should devalue a person’s body image.

Here is the bottom line people. Whether you agree with me or not, we are all equal. We are all beautiful, and even if we aren’t all attracted
to one another, we have to take off the blinders and see the beauty that resides inside and out of us all. I can honestly say that I’ve been
attracted to thin women, athletic women, curvy women, and heavy-set women. I’ve been attracted to women of all shapes, sizes, ethnicity and
more. Just as fat shaming exists, so too does skinny shaming. The purpose of this blog is to showcase that no matter what a persons
body size is, or what they look like, they are all beautiful. Don’t let people like Nicole Arbour come around and bully you into changing
your appearance. The only time a diet should come into play is to help with your health. Your physical appearance however, is gorgeous.
Men, we are all handsome, no matter what people say, and you women who may be self-conscious, know that you are incredibly beautiful.

In conclusion, no one should be ashamed of their body image. Trust me when I say I know what it’s like to be ashamed. I’ve battled that
feeling most of my life. I’m still a heavy set guy, and yet most of my food intake consists of healthy food. I’ve been dieting for a long
time now. Yet health problems and disabilities have hampered any sort of major weight loss I can achieve. I keep going for my health, but
I’m a big guy who is proud to be a big guy. No matter what, you guys will always have me in your corner, here to pick you up when you’re
feeling down. So if you are struggling with body image, reach out to someone. Whether you need a few words of encouragement on social media
from me, or you can talk to a parent, a sibling, a relative, a friend, or someone you love and who loves you, reach out and talk. And despite my thoughts on her video and the way she presented herself, don’t hate on Nicole or people like her, for they are forced to live their life in a horribly one-track frame of mind, and will not know what true happiness can feel like until they open themselves up to other ways of thinking.

Remember, you all are beautiful. Leave your thoughts and comments
down below, and be sure to share this blog with your family, friends and loved ones. This is author Anthony Avina, signing out. Long Days
and Pleasant Nights My Friends!